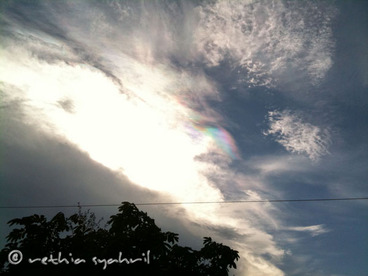 It was around 4.00-4.30 PM. I was sitting inside the car and looking up into the sky. And there’s a colourful things in the sky near to the sun. Such a beautiful view I’ve ever seen. It looks like a rainbow but without the arch. Don’t know what the name but there’s a strong feeling to take a pictures of it. Of course it’s not easy because with the car running 60 km/h and only got my phone’s camera with me, the pictures won’t be as good as I see.

A few hours later, someone told me it called SUN DOG. And I try to look the information about it. It is SUN DOG.

A sun dog or sundog (scientific name parhelion, plural parhelia, from Greek parēlion, (παρήλιον), παρά(beside) + ήλιος(sun), “beside the sun”; also called a mock sun) is an atmospheric phenomenon that creates bright spots of light in the sky, often on a luminous ring or halo on either side of the sun.[1] (formed by ice crystals)

Sundogs may appear as a colored patch of light to the left or right of the sun, 22° (distant and at the same distance above the horizon as the sun, and in ice halos. They can be seen anywhere in the world during any season, but they are not always obvious or bright. Sundogs are best seen and are most conspicuous when the sun is low.

Sundogs are formed by plate shaped hexagonal ice crystals in high and cold cirrus clouds or – during very cold weather – by ice crystals called diamond dust drifting in the air at low level.

Sun dogs orrur when the sun is at a 45 degree angle and the sun is at its lowest point. This is known as a sun dog or sun circallow.[2]

As the sun rises higher the rays passing through the crystals are increasingly skewed from the horizontal plane. Their angle of deviation increases and the sundogs move further from the sun.[3] However, they always stay at the same altitude as the sun.

Sundogs are red colored at the side nearest the sun. Farther out the colors grade through oranges to blue. However, the colors overlap considerably and so are muted, never pure or saturated. The colors of the sundog finally merge into the white of the parhelic circle (if the latter is visible).

It is possible to theoretically predict the forms of sundogs as would be seen on other planets and moons. Mars might have sundogs formed by both water-ice and CO2-ice. On the giant gas planets—Jupiter, Saturn, Uranus and Neptune—other crystals form the clouds of ammonia, methane, and other substances that can produce halos with four or more sundogs.[4]

For complete information, you can read at http://en.wikipedia.org/wiki/Sun_dog 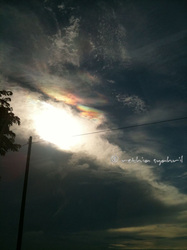 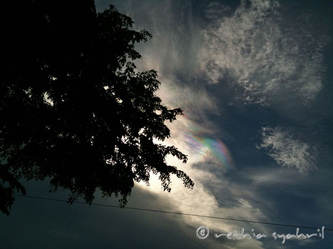 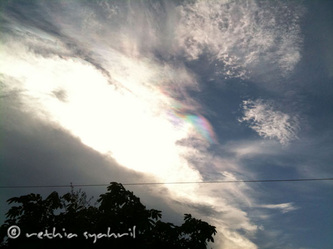 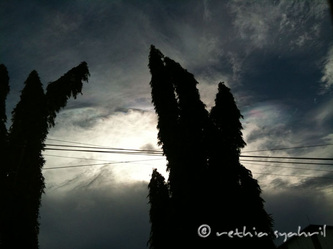 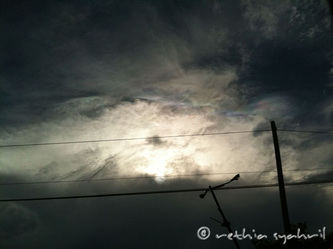 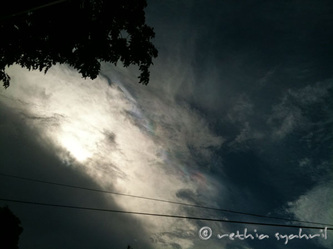 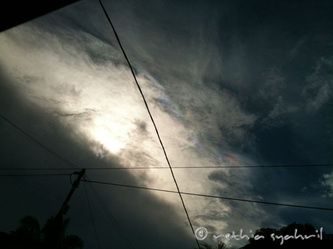 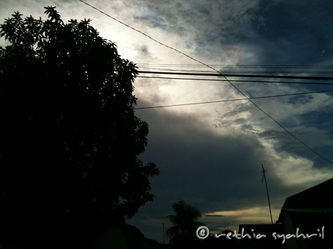