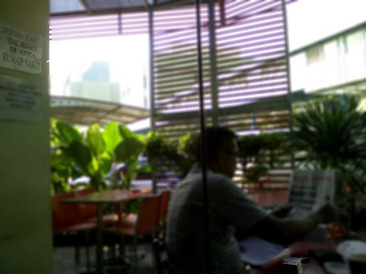 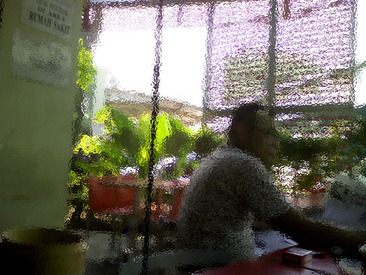 This morning, my husband and I visit Harapan Kita Hospital. We supposed to met my uncle in that hospital. We got there at 7.30 a.m. and waiting for him. Finally we met him and after that we planed to leave the hospital. Because we leave home without breakfast, we decided to have breakfast in the hospital before we go home.

Meanwhile we wait for the food to came, I realize that a man sat outside the window. He enjoy his cigarette so much and I don’t think he realize he sat under the “no smoking” sign. What a nice view we had, so we decided to take the pictures to put in my writing.

I just don’t get what this man thought of. First he smoke in public area, second he smoke in hospital. I don’t know where he put his brain at.

We have the right for clear air, so if you have someone smoking near you and you don’t like it, just say it out loud to them to move from your side. That’s what I used to do and did it last friday.

At that time, around 6.30 p.m. while I waiting for the bus to came, there’s a man and a woman sit beside me at the bus stop. The man just finished his cigarette and throw it to the road (without feeling guilty) and after a while (around 10 minutes) he starts his new cigarette. I start to feel there’s a thorn in my but. I can’t stand it anymore, I just say to him “if he wants to smoke his cigarette, just keep the smoke away from me”. Fortunately, this man apologizes to me and moved to other place. And what make me anger is he throw his cigarettes to the road AGAIN. From what I see, this couple looks like such an educated people, so they must be know that he supposed not to smoke in public area and of course not litter on the road.

So what about you?