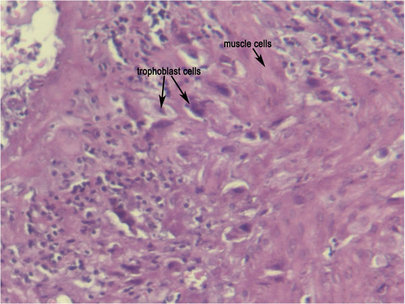 This is a little bit about placenta accreta that I would like to share with all of you. Hope it will be a good information. 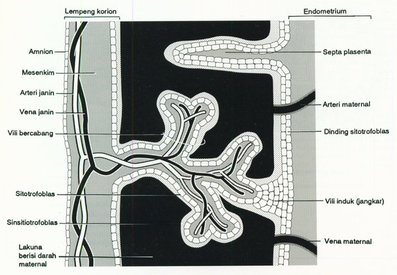 Placental and endometrium. This is a picture of placental that attached to endometrium.
The placenta usually detaches from the uterine wall relatively easily, but women that encounter placenta accreta during childbirth are at great risk of haemorrhageduring its removal. This commonly requires surgery to stem the bleeding and fully remove the placenta, and in severe forms can often lead to a hysterectomy or be fatal. It is reported to have a mortality rate around 7% and is the most common indication for birth-related hysterectomy.

Variants
The most common form of placenta accreta is an invasion of the myometrium which does not penetrate the entire thickness of the muscle. This form of the condition accounts for around 75-78% of all cases, and has no name other than placenta accreta.

There are two further variants of the condition that are known by specific names and are defined by the depth of their attachment to uterine wall. Placenta increta occurs when the placenta further extends into the myometrium and happens in around 17% of all cases. Placenta percreta, the worst form of the condition and occurring in 5-7% of cases, is when the placenta penetrates the entire myometrium to the uterine serosa (invades through entire uterine wall). This variant can lead to the placenta attaching to other organs such as the rectum or bladder.

Risk Factor
The condition affects around 10% of cases of placenta previa (low-lying placenta), and is increased in incidence by the presence of scar tissue from a pastcaesarean section. A thin decidua can also be a contributing factor to such trophoblastic invasion. Some studies suggest that the rate of incidence is higher when the fetus is female.

In women with a history of one caesarian delivery, the incidence of placenta accreta may be as high as 30 percent. The risk increases with multiple caesarean deliveries and is also increased in women with history of uterine surgeries or maternal age over 35 years.

Diagnosis
Placenta accreta is very rarely recognized before birth, and is very difficult to diagnose. While it can lead to some vaginal bleeding during the third trimester, this is more commonly associated with the factors leading to the condition. In some cases the second trimester can see elevated maternal serum alpha-fetoproteinlevels, though this is also an indicator of many other conditions.

The other way to make sure the diagnosed is with making microscopic slide from the uterine that had been removed. In this slide, you can see the trophoblasts cell will move to the myometrium.

Undiagnosed placenta accreta is associated with significant maternal morbidity and mortality up to 25%, due to intrapartum hemorrhage, uterine rupture, abscess formation, and bladder and rectum invasion. 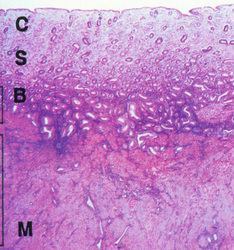 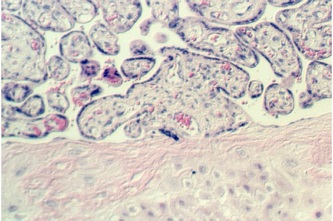 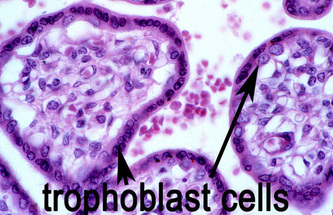 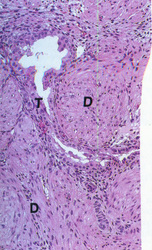