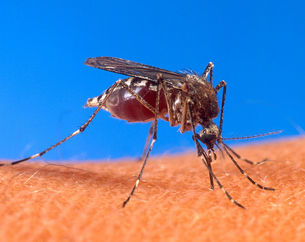 The Aedes aegypti mosquito biting human flesh. picture courtesy of wikipedia.com (http://en.wikipedia.org/wiki/File:Aedes_aegypti_biting_human.jpg)
Chikungunya virus (CHIKV) is an arbovirus, of the genus, Alphavirus, that is transmitted to humans by virus-carrying Aedesmosquitoes. There have been recent outbreaks of CHIKV associated with severe morbidity. CHIKV causes an illness with symptoms similar to dengue fever. CHIKV manifests itself with a prolonged arthralgic disease that affects the joints of the extremities. The acute febrile phase of the illness lasts only two to five days. The pain associated with CHIKV infection of the joints persists for weeks or months.

SIGN AND SYMPTOMS
The incubation period of Chikungunya disease is from two to four days. Symptoms of the disease include a fever up to 39 °C (102.2 °F), a petechial ormaculopapular rash of the trunk and occasionally the limbs, and arthralgia or arthritis affecting multiple joints. Other nonspecific symptoms can includeheadache, conjunctival injection, and slight photophobia. Typically, the fever lasts for two days and then ends abruptly. However, other symptoms, namely joint pain, intense headache, insomnia and an extreme degree of prostration last for a variable period; usually for about 5 to 7 days. Patients have complained of joint pains for much longer time periods depending on their age.

CAUSES
Chikungunya virus is indigenous to tropical Africa and Asia, where it is transmitted to humans by the bite of infected mosquitoes, usually of the genus Aedes. CHIK fever epidemics are sustained by human-mosquito-human transmission. The word “chikungunya” is thought to derive from description in local dialect of the contorted posture of patients afflicted with the severe joint pain associated with this disease. In Makonde language, Chikungunya means: « that which bends up ». The main virus reservoirs are monkeys, but other species can also be affected, including humans.

DIAGNOSE
The clinical manifestations of chikungunya fever resemble those of dengue fever. Laboratory diagnosis is critical to establish the cause of diagnosis and initiate specific public health response.

Virus isolation
Virus isolation is the most definitive tests. Between 2-5 ml of whole blood is collected during the first week of illness in commercial heparinzed tube and transported on ice to the laboratory. The CHIK virus produces cytopathic effects in a variety of cell lines including BHK-21, HeLa and Vero cells. The cytopathic effects must be confirmed by CHIK specific antiserum and the results can take between 1-2 weeks. Virus isolation must only be carried in BSL-3 laboratories to reduce the risk of viral transmission.

Serological diagnosis
For serological diagnosis between 10-15 ml of whole blood sera are required; an acute phase serum must be collected immediately after clinical onset and a convalescent phase serum10-14 after the disease onset. The blood specimen is transported at 4 degrees and not frozen to the laboratory immediately. If testing cannot be done immediately, the blood specimen is separated into sera that should be stored and shipped frozen.

Serologic diagnosis can be made by demonstration of fourfold increase in antibody in acute and convalescent sera or demonstrating IgM antibodies specific for CHIK virus. A commonly used test is the Immunoglobulin M Antibody (IgM) capture enzyme-linked immunosorbent assay (MAC-ELISA). Results of MAC-ELISA can be available within 2-3 days. Cross-reaction with other flavirus antibodies such as o’nyong-nyong and Semliki Forest occur in the MAC-ELISA; however, the latter viruses are relatively rare in South East Asia but if further confirmation is required it can be done by   neutralization tests and Hemagglutination Inhibition Assay (HIA).

Interpretation of results
Sero-diagnosis rests on demonstrating a fourfold increase in CHIK IgG titer between the acute and convalescent phase sera. However, getting paired sera is usually not practical.   Alternatively, the demonstration of IgM antibodies specific for Chikungunya virus in acute-phase sera is used in instances where paired sera cannot be collected.

A positive virus culture supplemented with neutralization is taken as definitive proof for the presence of Chikungunya virus.

PCR results for E1 and C genome either singly or together constitute a positive result for Chikungunya virus.

PREVENTION
The most effective means of prevention are those that protect against any contact with the disease-carrying mosquitoes. These include using insect repellents with substances like DEET (also called NNDB or N,N’-Diethyl-3-methylbenzamide), icaridin (also known as picaridin and KBR3023), PMD (p-menthane-3,8-diol, a substance derived from the lemon eucalyptus tree), or IR3535. Wearing bite-proof long sleeves and trousers (pants) also offers protection. In addition, garments can be treated with pyrethroids, a class of insecticides that often has repellent properties. Vaporized pyrethroids (for example in mosquito coils) are also insect repellents. Securing screens on windows and doors will help to keep mosquitoes out of the house. In the case of the day active Aedes aegypti and Aedes albopictus, however, this will only have a limited effect, since many contacts between the vector and the host occur outside. Thus, mosquito control is especially important.

TREATMENT
There are no specific treatments for Chikungunya. There is no vaccine currently available. A Phase II vaccine trial, sponsored by the US Government and published in the American Journal of Tropical Medicine and Hygiene in 2000, used a live, attenuated virus, developing viral resistance in 98% of those tested after 28 days and 85% still showed resistance after one year.

A serological test for Chikungunya is available from the University of Malaya in Kuala Lumpur, Malaysia.

Chloroquine is gaining ground as a possible treatment for the symptoms associated with chikungunya, and as an antiviral agent to combat the Chikungunya virus. A University of Malaya study found that for arthritis-like symptoms that are not relieved by aspirin and non-steroidal anti-inflammatory drugs (NSAID), chloroquinephosphate (250 mg/day) has given promising results.[9] Research by an Italian scientist, Andrea Savarino, and his colleagues together with a French government press release in March 2006[10] have added more credence to the claim that chloroquine might be effective in treating chikungunya. Unpublished studies in cell culture and monkeys show no effect of chloroquine treatment on reduction of chikungunya disease. The fact sheet on Chikungunya advises against using aspirin, ibuprofen, naproxen and other NSAIDs that are recommended for arthritic pain and fever.

Infected persons should limit further exposure to mosquito bites, stay indoors and under a mosquito net. Further, “supportive care with rest is preferred during the acute joint symptoms. Movement and mild exercise tend to improve stiffness and morning arthralgia, but heavy exercise may exacerbate rheumaticsymptoms.”[11] Arthralgia remains troublesome even after 8 months. In Kerala, patients use honey-and-lime mix. Some people cite relief from consuming turmeric in low volumes.

Ocular inflammation from Chikungunya may present as iridocyclitis, and have retinal lesions as well.

Pedal oedema (swelling of legs) is observed in many patients, the cause of which remains obscure as it is not related to any cardiovascular, renal or hepatic abnormalities.

In Africa, chikungunya is spread via a sylvatic cycle in which the virus largely resides in other primates in between human outbreaks.

Since its discovery in Tanganyika, Africa in 1952, chikungunya virus outbreaks have occurred occasionally in Africa, South Asia, and Southeast Asia, but recent outbreaks have spread the disease over a wider range.